by India CSR Network
in No Poverty
Reading Time: 3 min 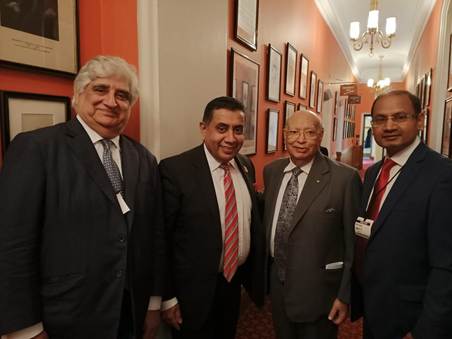 CHANDIGARH: The Loomba Foundation held an event at the House of Lords on 4th November 2019 to celebrate the 550th birthday of Guru Nanak Dev Ji. The event was held in association with Rt. Hon. Lord Ahmad of Wimbledon, Minster of State for the Commonwealth, UN and South Asia from the Foreign & Commonwealth Office.

In Punjab there will be 550 marriages of young ladies to commemorate the 550th birthday of Guru Nanak Dev Ji. The Loomba Foundation has pledged to donate 550 sewing machines to these poor brides.

Lord Loomba CBE opened the event by warmly welcoming the guests. In his speech he went on to talk about Guru Nanak’s virtues. They include the oneness of mankind in that everyone is equal. He championed gender equality so he was ahead of his time. Lord Loomba also pointed out that he travelled 30,000 km by foot, over many years, to spread his message and wisdom.

Lord Ahmad delivered the keynote speech to mark this special occasion and noted the contribution that Sikh community have made in the UK. Their contribution includes fighting in the Second World War and from a business point of view he noted that a “community barely half a million strong contributes over £8 billion to the UK economy every year”. Lord Ahmad finished his speech with a delightful quote from the Guru himself. “Even Kings and emperors with heaps of wealth and vast dominion cannot compare with an ant filled with the love of God”.

The other speakers Rt. Hon. Lord Paul PC and Mr Manmeet Singh, Minister of Coordination of Indian High Commission, also praised Guru Nanak’s contribution to mankind and his teachings which are as relevant today as they were at that time.

About the Loomba Foundation

In 2005 the Loomba Foundation launched International Widows Day at the House of Lords in the UK, as an effective day of action for widows and their children around the world.

After a tireless campaign for five years the UN adopted 23rd of June as the UN International Widows Day at its 65th UN General Assembly in 2010. 23rd of June is a significant day as it was on this day Lord Loomba’s mother, Shrimati Pushpa Wati Loomba, became widow in Punjab in India in 1954.

In India, the Loomba Foundation to date has educated over 10000 children of poor widows in all 30 states, who received a monthly scholarship of Rs.500 per month for a period of five years or more. In addition, the Foundation has empowered over 12000 impoverished widows, who received skills training in tailoring and upon completion of the training, they were also donated a sewing machine free of cost.

The Loomba Foundation is currently campaigning with the Govt. of India to set up a National Commission for Widows and Widows Help Centres through Panchayats in India, as part of our advocacy initiatives.

The Loomba Foundation has published books (i) Invisible Forgotten Sufferers: The Plight of Widows Around the World (ii) A Hidden Calamity – the plight of widows (iii) One Man walking – 30 X 30 a walk for Widows (iv) World Widows Report, (v) 1997-2017 Twenty Successful Years: Fighting Injustice Against Widows, (vi) International Widows Day: the story of a global campaign for justice and peace.

CSR: IndiGo is lending a helping hand to women in distress in Maharashtra