Moral Re-Armament camp is one of the initiatives under CSR to strengthen morality and leadership among youths. In this fiscal year, 88 youths from various peripheral villages were sent for 3 days of MRA camp in two batches.

With an objective to analyze the strength and weakness, set personal and vocational goals and to inculcate self-esteem, confidence and to guide the youths to make them role models in their area, TSRDS has been sending local youths from in and around West Bokaro to attend MRA camps at Jamshedpur.

Addressing the youths on the occasion, Kuchroo said, “In today’s world, strengthening moral education is required in the society and such a program will surely help in the nation building process. One should work hard to set examples and be a role model for others to follow and play a pivotal role in making the society a better and happier place to live in.”

The programmes under the MRA Camps are designed mainly to focus on personal leadership which is a cornerstone for a service-based leadership. The necessity of being rooted in strong moral values for providing effective living and leadership is need of the hour in the changing environment in our society. 88 such youths who were sent to MRA camps at Jamshedpur in two batches in the month of July and August were awarded with certificates on the occasion.

On the occasion, many of the participants also shared their experiences with other fellow participants and officials of Tata Steel.

Among others present on the occasion were senior officials of Tata Steel and TSRDS. 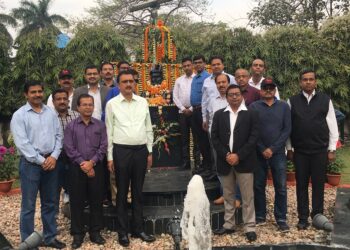