Working directly with different communities and juvenile houses, I have witnessed kids as young as 4 and 5 years old, doing time for stealing. 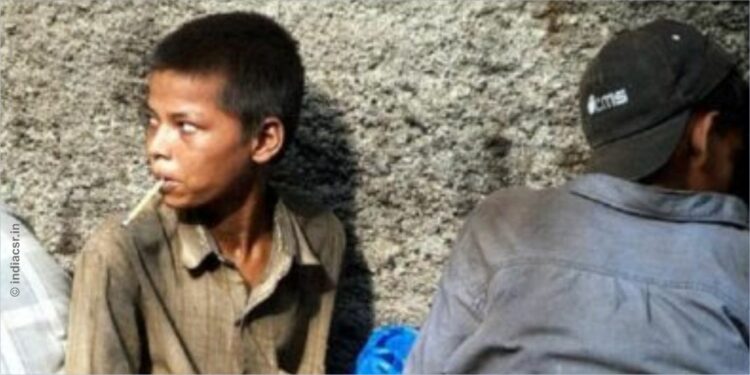 You are out in the market to get some groceries and on stepping out of the store, you find two 14-year-old kids looking for alms. For a moment you think and then handout a five-rupee coin each to these young boys. As you proceed with the shopping, sometime later you find these boys sitting in a corner sniffing thinner off a rag. You instantly start feeling guilty of offering them money, which instead of using for food, they spent on substance abuse.

India is one of the biggest populations in the world with a similar ratio in substance abuse. As per a report by National Drug Dependence Treatment Centre (NDDTC), as per 2019, India had 2.6 crore users of heroin, morphine; 1.18 crore users of sedatives and inhalant; 8.5 lakh users of injected drugs and 27% of such were risking their lives to diseases like HIV; and 16 crore alcoholics (14.6% of the total population of the country). (Source)

A big percentage of substance abusers are children, from ages 5 to 17, using anything and everything that will make them high, be it cocaine, heroin, smack, brown sugar, iodex, thinner, or even shoe polish. You will find kids roaming on the red lights, market areas, railways and bus stations, sniffing rags, injecting heroin, smoking marijuana and charas (hashish).

Unfortunately, substance abuse is directly proportional to the crime, as an addict will do anything to get the dose, be it begging, snatching, stealing or in the worst cases, murdering someone. Working directly with different communities and juvenile houses, I have witnessed kids as young as 4 and 5 years old, doing time for stealing. As per the Chennai Juvenile Justice Board, at least 40% of the juveniles under conflict with the law are substance abusers. (Source)

As per the common notion, de-addiction and rehabilitation centres are effective in reforming these juveniles, but the reality is not in-line with this notion. Working with Salaam Baalak Trust and Society for Promotion of Youth and Masses (SPYM) in slums like Todapur, Delhi, I came across the bitter reality of substance abuse in children.

A kid coming out of the juvenile house, de-addiction or rehab centre would restart the abuse in a short while. It is all about the company they have, as the parents being labourers, leave to work and the kids sit with fellow humans living in the slum abusing the substance. This is where they learn of how life is easy with the use of drugs and education or work will require efforts, so they choose the ‘high’ and easy way of earning via unlawful activities. In simpler words, it can be defined as, ‘bigger the urge, bigger the crime’.

What can be done?

While de-addiction or rehabs aren’t of great use for children indulged in substance abuse, it becomes our duty to help kids having a bright future, instead of a woozy and blurred image of life. Working in the slums, I understood that training/lectures won’t be of much help as the kids will get relapsed in a week’s time. The solution was to keep them engaged, entertained and educate.

For this, we started training a few responsible people in the community as ‘changemakers’, who would take responsibility for 8-10 kids each. These people would keep a check on the kids’ education and engagement post-school hours. In a month’s time, this course of events completely took away the kids from substance abuse and towards education and socially healthier activities.

We, as the citizen of India, need to take the responsibility of keeping kids off the drugs, by offering them a brighter future through education. As I always request, take out some time from the schedule and volunteer at an NGO to work on such issues, preventing kids from exposure to substance abuse.