Agriculture: How a jacktree farm turned a sleepy village into agriculture hub in Kerala

In the last three years, Tharakan has raised 9 lakh saplings and grown 1,000 jacktrees. The other thing that keeps him busy: trying to solve the puzzle whether jackfruit is fruit or flower.

by India CSR Network
in Safe Food For All

There’s no ‘offseason’ for farmer Varghese Tharakan’s barely three-yearold jacktree farm. His trees bear fruit at least twice a year. Jack trees in Asia normally have three to four month seasons starting March or April depending on the region.

The Ayurjack variety he has developed, alongside soil and water conservation practices on his farm, has drawn the attention of researchers too, with Australia’s Adelaide University studying the cultivation model he has developed.

Word of his farm has also made Kurumal Kunnu, once a small hamlet in Perur, 16 km from Thrissur in central Kerala, a centre of attraction. It draws hordes eager to learn about Ayurjack that yields fruit through the year.

Tharakan turned to farming around 2005 and started his experiments with the jacktree just about a decade ago. It all began when a jackfruit tree in the backyard of his in-laws’ home was about to face the axe for road widening.

Tharakan decided to propagate and develop the variety. “I named it Ayurjack. To my surprise, the new trees started yielding in just two years and that too twice a year like the parent tree.” He soon cut down rubber trees, that draw massive amounts of water, on his five-acre plot and planted Ayurjack instead. His farm flourished.

Tharakan, though, does not sell the jackfruits. He only sells the saplings. “I get several groups of visitors from across the country every day. They come to learn about my cultivation and taste the fruit. Many are those who have failed in cultivating other crops and seek an alternative that can sustain their farming pursuits. I give the fruits to my visitors and keep the seeds,” he said.

His main source of revenue is from the sale of saplings, which he started a year ago. “I charge Rs 500 for a 6-month-old sapling and Rs 250 for a 3-month-old one,” he said. Asked why he chose jackfruit to script his agricultural wonder, he said, “Unlike many other fruits, the jackfruit has 25 medicinal benefits. It is good for even diabetics and the fruit is indigenous, native to the Western Ghats.” Jacktrees are counted among trees that contribute significantly to oxygen levels. “Going by price of oxygen cylinders in the market, a jacktree releases Rs 100 crore worth of oxygen a year,” is Tharakan’s assertion.

He received Kerala’s first Water Congress award in 2015, and the Dr Ambedkar National Excellence Award for water management. He was shortlisted for UN’s Water Air Food Award. “I tapped as much as 6 crore litres of rainwater annually from five acres. I use less than 5% for irrigation. The balance is contribution to nature,” he said.

By 2013, through extensive trenching and channelling, Tharakan had completely stopped rainwater run-off from his plot though it is a terraced property with steep slopes. The rainwater yield not only keeps his wells charged through the year, but also recharges the underground aquifer.

This provides drinking water to 35 houses nearby that struggled for water during summer. The Netherlands had funded a borewell project in the village in 1995 and the London School of Economics carried out a study on participatory irrigation management project. But by 2012, the borewell had gone dry. “I can claim today that where the Netherlands failed, I succeeded through rainwater harvesting,” he said.

In the last three years, Tharakan has raised 9 lakh saplings and grown 1,000 jacktrees. The other thing that keeps him busy: trying to solve the puzzle whether jackfruit is fruit or flower. 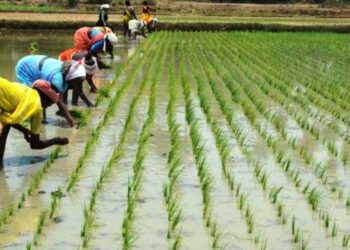 Workshop on CSR for Agricultural Development