NEW DELHI:Roundtable discussion on CSR for Science and Tech Education for Better Indiawill be held at PHD Chamber of Commerce in New Delhi on March 8, 2018 during 9:00 AM to 2:00 PM.

Gujral’s responsibilities at LG India include, Brand Management, Digital/Social Marketing, CRM, Media, PR, CSR and Govt. Relations. He is responsible for the development and delivery of a fully integrated marketing and communication strategy for the business. He joined LG India in September 2009.

Gujral is a Computer Science Engineering Graduate and is in the Industry since last 23 Years. Prior to joining LG, he had a stint with companies such as BEL, HCL, Flextronics, LG Soft India.

He brings with him a rich experience and understanding of the Indian technology industry. His career reflects hands on experience in the areas of marketing, sales, product planning, value added services, strategy, R&D and business planning.

We welcome like-minded corporate, CSR leaders, agencies, donors to join the forum. Write us at rusenk@indiacsr.in or call at +91-9981099555

CSR: LG Commits to serve over 1 million meals with a donation of Rs 2 Cr to Akshaya Patra 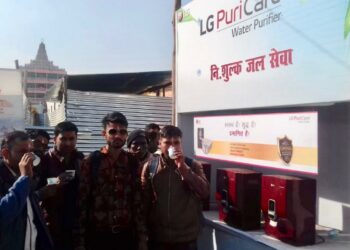