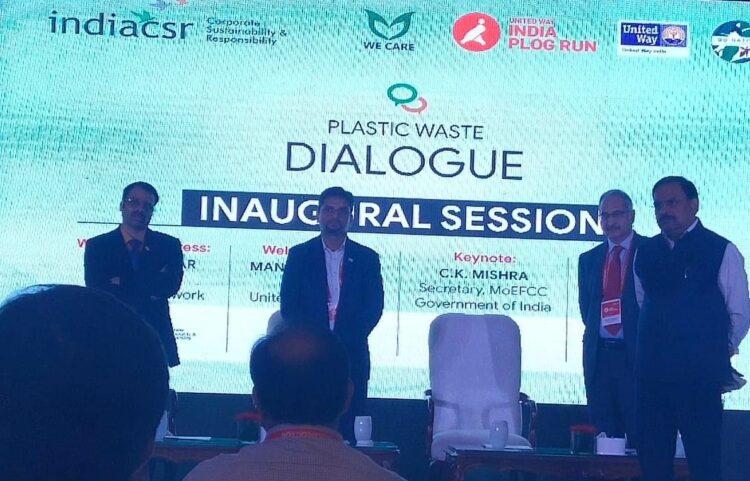 New Delhi – Industry has taken on record that something has to be done on responsible plastic use and waste mitigation, Sanjay Khajuria, Director Corporate Affairs at Nestle India said at Plastic Waste Dialogue in New Delhi on Tuesday (27 Aug).

The industry has already embarked on the path to find ways and means to recycle plastic waste, Khajuria said while speaking during a dialogue responsible plastic use and waste mitigation.

The director also said that the industry did not see the Extended Producers Responsibility (EPR) as a burden but thinks as to what more can be done on this.

The Dialogue is being hosted in collaboration with Gonative and United Way India Plog Run.

“When the Prime Minister, Shri Narendra Modi ji acknowledges about the problem from the ramparts of the Red Fort during his Independence Day speech, it calls for a collective action from all of us, to be a part of the solution rather than just the problem,” India CSR Founder and Managing Editor said while speaking at the occasion.

“India CSR has not only been a publication which writes about sustainability and corporate social
responsibility, but we have been a great proponent of environmental sustainability and it is for the
very reason we have organised a dialogue which will motivate us all to move at least one step
forward from where we are, at this point-in-time,” Kumar said.

“Though our on-year consumption of plastic is growing and is likely to grow further, the good news is
that we are recycling more plastic than we were ever recycling. Infact, the overall waste
management industry in India is likely to attain a worth of USD 13.6 billion by 2025, growing at a
compound annual growth rate of 7.2%.,” he said

“The government have to enable an environment where sustainable measures could be taken by way
of legislations and strict enforcement, corporate sector and NGOs will have to create solutions while
the public at large has to take it upon itself to practice at individual levels,” he further added.

Though we need to do much more on this, I can say this with some authority that many corporate
houses especially the ones present here have started taking steps towards responsible consumption
and plastic waste mitigation.

The Dialogue will involve some of the most reputable and competent national and world-renowned speakers from industries, CSR, non-profit organizations, international agencies, academia, and research organisations.

The day-long affair will see some of the most powerful voices in government, industry, non-governmental organisations, international agencies, academia, and research organisations.

India’s annual plastic consumption at 16.5 million tn is expected to cross 20 million tn by 2020 according to a report.

Over 80% of the total plastic produced in India is discarded which ends up filling landfills, choking drains and eventually flowing in rivers and seas where it is ingested by marine animals.

It leaches into soil and water, contaminating the natural environment with poisonous dioxins.

Effective management of plastic waste therefore is crucial to do away with environmental hazard caused by plastics.

As the dialogue progresses, a dance performance by Delhi street children on plastic use and waste
mitigation will be on display. The performance is choreographed by a Delhi-based not-for-profit –
Flying Feet.

There will also be exhibition by Cartoonist and Editor of Cartoon Watch Shri Triambak Sharma ji.